As the Israeli military bombed homes,  clinics, and schools in Gaza and threatened to push Palestinian families from their homes in Jerusalem May 2021, Amazon Web Services and Google Cloud executives signed a $1.22 billion contract to provide cloud technology to the Israeli government and military. By doing business with Israeli apartheid, Amazon and Google will make it easier for the Israeli government to surveil Palestinians and force them off their land.

We’re heeding the call from over 1000 Google and Amazon workers to rise up against the contract, known as Project Nimbus.  Technology should be used to bring people together, not enable apartheid, ethnic cleansing, and settler-colonialism.

Following in the footsteps of those who fought to divest from apartheid South Africa and won, it’s our responsibility to rise up in support of Palestinian freedom. The Amazon and Google execs who signed this contract can still choose to be on the right side of history.

Rise up with us to say: No Tech For Apartheid.

The harmful impact of Israeli apartheid on Palestinians is well documented. Recently, mainstream organizations like Human Rights Watch and Israel-based B’Tselem released reports echoing what Palestinians have said for generations: the Israeli government is running an apartheid regime.

Google and Amazon are doing business with apartheid. Palestinians are already harmed by Israeli military surveillance and repression. By expanding public cloud computing capacity and providing their state of the art technology to the Israeli government and military, Amazon and Google are helping to make Israeli apartheid more efficient, more violent, and even deadlier for Palestinians.

Technology should be used to bring people together, not facilitate and entrench violence, occupation, and land grabs. Google and Amazon’s cloud services may be used to enable Israel's expansion of illegal settlements by supporting data collection for the Israel Land Authority (ILA), part of the Israeli government. The ILA uses discriminatory policies to expand segregated Jewish settlements while trapping Palestinians in densely populated areas and limiting the growth of Palestinian communities.

By collaborating with the Israeli government and military, Amazon and Google are complicit in enabling abuses such as:

Join the Day of Action: 3 Ways You Can Participate!

For over a year, Amazon and Google workers and a coalition of 40+ grassroots organizations have been organizing to end both companies’ contracts with the Israeli military and apartheid government. The message is clear: tech workers do not want to build technology used to surveil, oppress, or commit other forms of violence against Palestinians.

On September 8th, 2022, Amazon and Google tech workers will lead direct actions in front of their offices in Seattle, San Francisco, and New York City to escalate the pressure and demand #NoTechForApartheid!

In Solidarity: Action Takers Across the Country 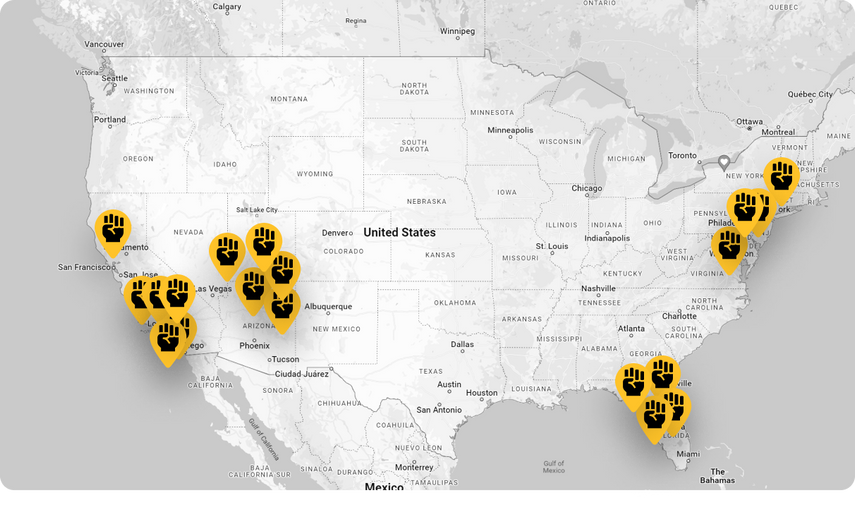